“Bar-Kays” - the very name is synonymous with soul music. In fact, after backing some of Stax and Volt records’ greatest acts like Albert King, Rufus & Carla Thomas, and Sam and Dave, they could be called soul music’s greatest house band. The Bar-Kays’ story is a tale of three separate bands. The first band was a group of young, talented musicians who put their mark on the new soul sound coming from 126 E. McLemore. The second was the funk masters whose good times and good groves drew thousands to the dancefloor in the disco era. And the third band features the legendary masters who evolved into mentors for emerging artists and recrafted their sound for the grown and the sexy. The Bar-Kays formed in Memphis in 1966, growing out of a local group, The Imperials. Their name was a take-off of Bacardi Rum. Molded after Memphis instrumental soul acts like the Mar-Keys and Booker T. & the MG’s, the original band consisted of Jimmie King (guitar), James Alexander (bass), Ronnie Caldwell (electric organ), Ben Cauley (trumpet), Phalon Jones (saxophone), and Carl Cunningham (drums).

All of the band members were students at Booker T. Washington high school by day but by night played regularly around Memphis at famous hotspots like The Palace, Hippodrome, Flamingo Room, Club Tropicana, and Blue Stallion. Booker T. Washington band director Harry Winfield helped book them, even though most of the members were too young to even get into the clubs as audience members.

James Alexander and Carla Thomas on the Early Bar‑Kays 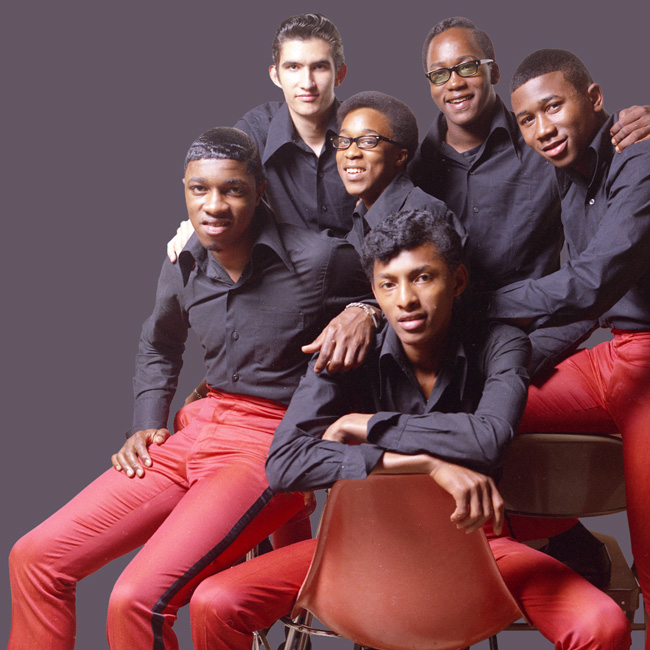 “I played the Hippodrome and I was not even supposed to be there. The club owner would hide us in the dressing room when the vice squad raided the club for under age people,” remembered James Alexander. “The club owner was connected. Someone would call him from downtown and say they were coming to his club. He would let the vice carry out the other under age folks but we always dodged the bullet. When the vice squad left we went back on stage.”

The band signed with Stax Records in 1967 as both a recording act and alternative studio session band when Booker T. and the MG’s were unavailable. That year, they cut their first single, “Soul Finger.” The infectious party melody became a hit, reaching number three on the R&B charts and breaching the Pop Top 20. The band's talent attracted labelmate Otis Redding, who selected the Bar-Kays as his backing band. The young mavericks provided the foundation for the King of Soul when he debuted at the Apollo Theatre and embarked on his American tour. “Otis came to the Hippodrome and wanted to play with us,” Alexander stated. “He offered to get a tutor for us. Our parents said ‘no’ because we were still in high school. But finally they gave in. Otis never rehearsed with us. We never had a rehearsal. When he got ready to play the Apollo, we wanted a rehearsal. I mean that was a big gig, no second chances if we messed up. Otis said no, that we already knew the music. He had enough confidence in us. Can you imagine that for a kid who was still in high school playing with one of the hottest acts in the world? Funny, the thing I remember the most about that gig was that we didn’t have but one suit to wear. We had no idea those Apollo fans were crazy about Otis. They came to more than one show. So the third day when we showed up playing in the same clothing, someone yelled from the audience, ‘You guys need some new suits.’ We were trying to be these big stars and only had one suit.”

Bar-Kays reflect on the plane crash of December 1967

The pair took on the painstaking role of rebuilding the Bar-Kays. They recruited Michael Tales (guitar), Harvey Henderson (saxophone), Ronnie Gordon (keyboards) and drummers Roy Cunningham and Willie Hall. The new band continued as a Stax/Volt house band and their first songs together built on the original Bar-Kays sound. As they began working with labelmate Isaac Hayes, the Bar-Kays started to explore funkier sounds. Although their own hit song initially eluded them, the band backed Isaac Hayes on his groundbreaking album, "Hot Buttered Soul". ▶ 
Update Required To play the media you will need to either update your browser to a recent version or update your Flash plugin.
Walk on By
Isaac Hayes (backed by The Bar-Kays)
Hot Buttered Soul
Buy This Track The pair took on the painstaking role of rebuilding the Bar-Kays. They recruited Michael Tales (guitar), Harvey Henderson (saxophone), Ronnie Gordon (keyboards) and drummers Roy Cunningham and Willie Hall. The new band continued as a Stax/Volt house band and their first songs together built on the original Bar-Kays sound. As they began working with labelmate Isaac Hayes, the Bar-Kays started to explore funkier sounds. Although their own hit song initially eluded them, the band backed Isaac Hayes on his groundbreaking album, "Hot Buttered Soul".

Background: The Bar-Kays at Wattstax. Courtesy of Stax Museum of American Soul Music. In 1975, with Stax driven into bankruptcy, the Bar-Kays signed to Mercury Records. A U.S. tour with George Clinton’s Parliament Funkadelic introduced the group to a new audience, and their funkafied beats on songs like “Hot to Stop” and “Shake Your Rump" and crazy off stage antics became legendary.

As disco became popular, the Bar-Kays reverberated vocals, horns and heavy synth music were a perfect fit for the dance steps of the world’s boogie wonderland. In 1977, the band earned their first gold record with "Flying High on Your Love", which featured the horn ambush “Shut the Funk Up.” In 1978, the band's booty-shaking anthem, “Holy Ghost” climbed the charts. The Bar-Kays produced a hit every year from 1977 to 1982, with crowds hitting the dance floor for “Hit N Run,” “Move Your Boogie Body” and “She Talks To Me With Her Body.”

In 1983, Sherman Guy and Charles Allen left the group as the band pursued a more commercial direction in keeping with the urban sound of the early '80s. In 1984, Dangerous produced one of the group's biggest hits, "Freakshow on the Dancefloor," and several more R&B chart hits in "Dirty Dancer" and "Sex-O-Matic." Their sound was becoming derivative, however, and although the group kept recording for Mercury through 1989, the changing musical landscape meant that the hit songs just dried up.

The end of the 1980s ushered in a new era of music. The Bar-Kays faced another pivotal point in their history. Not only did they leave Mercury, but long time manager Allen Jones died of a heart attack just as his career direction and guidance was most vital.

The 1990s saw the Bar-Kays mostly performing live shows featuring their slew of hits. Although many considered their career a thing of the past, James Alexander and Larry Dodson’s “no surrender” battle plan started paying off as the duo tackled additional duties on the business side of the music industry. Dodson started a booking agency while securing gigs for the band and James Alexander molded a space for himself as a radio promoter. In 2003, the pair formed their own record company, JEA Records. Bassist James Alexander says “We continued making music. We recognized there wasn’t another option because it was so a part of us. I’d been training as a musician since my teens and I wasn’t prepared to give up on that. Determination propelled us forward. Then the new century saw this massive change in the music industry and we saw that we weren’t limited to what someone else told us to do. We could run all of the show.”

The Bar-Kays added a Stax tribute show to their repertoire in 2010 to pay homage to their past. They performed the show with the Memphis Symphony Orchestra, which opened the group to new performance opportunities. In 2011, they called upon the assistance of James’s son, hip-hop producer Jazze Pha to work on their latest album, "Grown Folks". The title track became their first hit song since 1987, spending weeks on the Adult R&B Top 10. The renewed interest in the Bar-Kays has transformed the band from a legacy act to contemporary artists with relevant music.

“JEA was created to release Bar-Kays music, but also to release emerging artists. When we created it, many artists saw releasing their own music as inaccessible. We were able to use our success and contacts to secure good distribution. The Bar-Kays have a lot more to give. We ain’t close to being done.” ▶ 
Update Required To play the media you will need to either update your browser to a recent version or update your Flash plugin.
Grown Folks
The Bar-Kays
Buy This Track