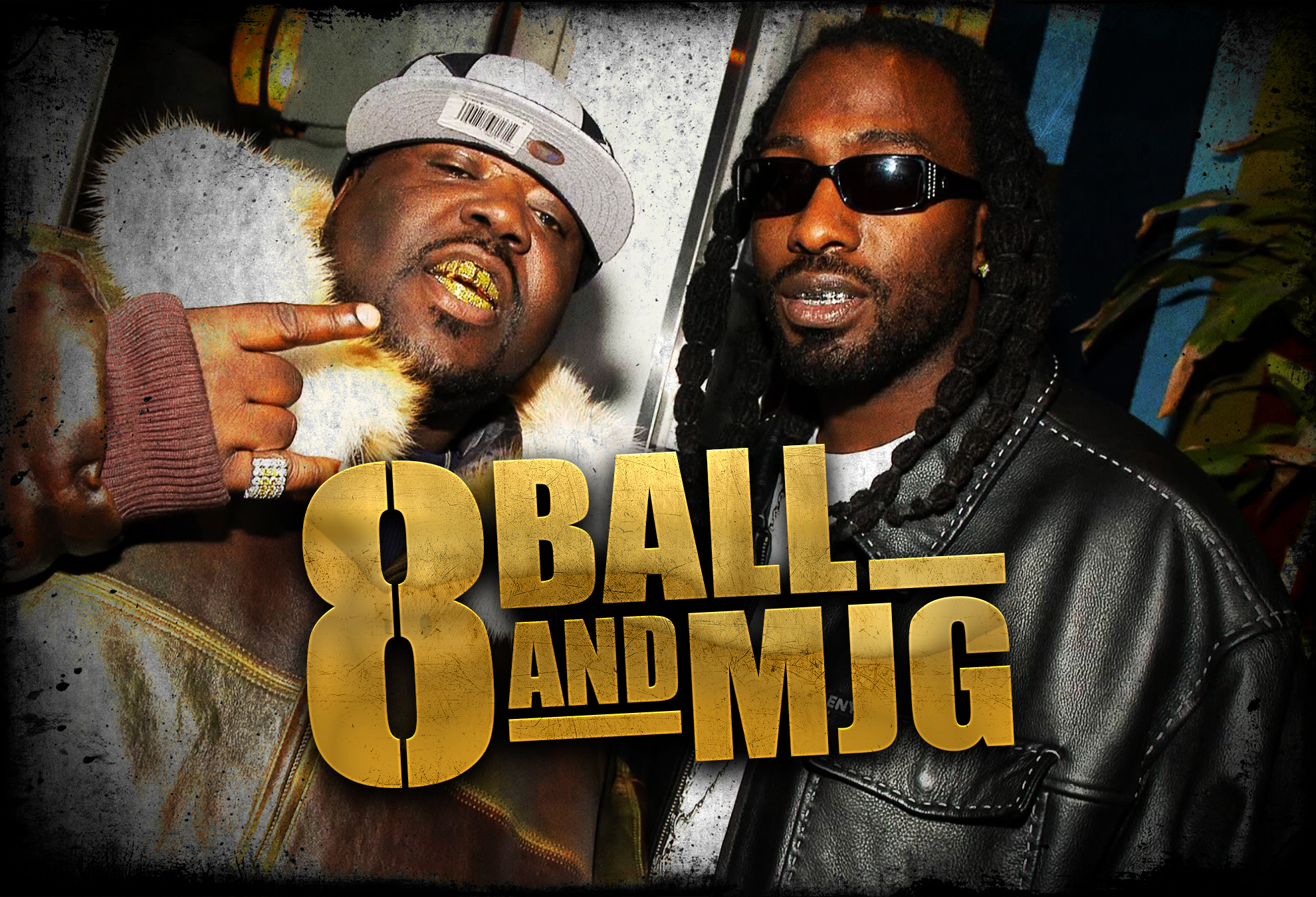 For many artists, releasing an album entitled Living Legends in the prime of their career - as 8Ball and MJG did in 2004 - may seem presumptuous at best, if not downright delusional.

But over the course of nearly 30 years in the business, the duo of Premro “8Ball” Smith and Marlon Jermaine Goodwin have established themselves as just that. Alongside artists like Outkast, the Geto Boys, and fellow Memphis legends Three 6 Mafia, 8Ball and MJG were at the forefront of defining, disseminating, and advocating for the Dirty South hip-hop sound that many critics argue is now the most popular genre on earth.

Hailing from the historical Orange Mound neighborhood of Memphis, 8Ball and MJG first joined forces as young teens in the 1980s. “It was seventh grade at Ridgeway High,” MJG recalled in 2010. “We took classes together, and we were two of the same. Every high school has cliques, and we ran with the weed-smoking, class-cutting damn near misfits.” Despite their instantaneous bond, the duo was (and remains) a study in contrasts. While the heavier 8Ball specialized in a smooth and laid-back style of rapping, his lanky counterpart perfected a much more aggressive, staccato flow. “Like we say all the time, we like the Studney Twins,” MJG once said, referencing the starkly different “twins” from a famous Godfathers Pizza ad. “It’s the Studney of it that makes it special. It’s the unalikeness that makes us so alike.”

Like many artists before them, 8Ball and MJG began their careers in the small clubs and talent shows around Memphis, taking gigs wherever they could find them. “We started hanging out at this little spot shooting pool, at this hole-in-the-wall club near MJG’s house that did blues, like live blues shows and made blues records,” said 8Ball. “We hung out there so much, when they’d walk away, they’d let us get on the mic and start beat-boxing, rapping and stuff… so that’s how we started doing talent shows.”

By the early ‘90s, the duo began to be featured on mixtapes from Memphis rap veteran DJ Squeeky, making them an early and important presence in the burgeoning Memphis scene. In 1993, the duo released their seminal debut album Comin’ Out Hard on Houston-based Suave House Records, an album that is now viewed as a landmark work in the history of Southern rap. It also marked the biggest break a Memphis hip-hop act had ever had up to that point, kicking the door open for fellow Bluff City rappers to make their own move for national acclaim.

The album, which was written and produced by Ball and G, served as both an ode to their hometown and a continuation of the city’s musical and historical legacy. “The Civil Rights Movement and the racism and the blues and soul music … all of that shaped what Memphis hip-hop is,” explained 8Ball. “Out of that 8Ball and MJG was born, Three 6 Mafia was born. And 8Ball and MJG was the soulful side of Memphis, and Three 6 Mafia was the mad, younger side.” That soulfulness was a direct result of their childhood musical influences, as MJG explained to NPR. “We left Memphis [for Houston] with a suitcase of records – 45s and 33s. We had a lot of Stax Records, Marvin Gaye records, Simply Red, Rufus, a bunch of stuff.”

With Comin’ Out Hard, the group set the tone for the coming Southern rap revolution, laying down grimy tales of street life over gritty yet soulful production. Like their contemporaries Ice-T and Scarface, 8Ball and MJG wove lyrical narratives, or “story raps,” about the things they saw and experienced in their neighborhood, striking a careful balance between realism and fantasy. As MJG recalled, “Everybody was telling stories of things that was going on in their places, but back then everybody – I don’t give a damn who you was – your music has to have a certain amount of theatrics to it.”

Comin' Out Hard
8Ball and MJG

Although the album failed to make a huge splash commercially, it signaled a sea change in Memphis, illustrating to a generation of Memphis rappers that mainstream success was within their grasps. “I remember popping it into my Oldsmobile … and we just hit the block, hit the mall and we just went everywhere. Just, ‘Woo!’ You didn’t want to get out of the car,” said Memphis producer Drumma Boy. Memphis rapper Don Trip had a similar experience with the album, recalling “The whole time, coming up as a rapper, that’s what they told me: ‘You will never make it from Memphis. You can never make it from Memphis.’ Growing up, that was one of the milestones. Like, Comin’ Out Hard came from here. If they can make it from here, anybody can make it from here. That’s what gave me the ammunition I needed.”

As the decade rolled on, the group continued to release celebrated albums, each of which built upon the strength of their previous work. As journalist Tom Breihan wrote, “Their outlaw-duo chemistry was there from the beginning, but over the years since Comin’ Out Hard, the two cultivated a fascinatingly schizo approach, swinging haphazardly from visceral bone-chilling pimp-talk to warm, openhearted up-from-nothing inspirational tales.”

Their third album, 1995’s On Top of the World, proved to be both an artistic high-water mark and the national breakthrough they’d been waiting on, reaching #2 on the Billboard charts and producing their first hit single “Space Age Pimpin’.” More importantly, the album created a blueprint for southern rap as we now know it – soulful, honest, and utterly tenacious. As hip-hop magazine XXL noted, “On Top of the World’s funky, futuristic style undoubtedly helped form a new sub-genre in rap. It merges perfectly with 8Ball and MJG’s lyrical content, as they serve as conscious, storytelling gangsters.”

In 1998, 8Ball and MJG each released acclaimed solo albums, solidifying their individual strengths in the public consciousness. 8Ball’s album Lost was particularly successful, going on to peak at No. 5 on the charts and selling upwards of a million copies, making him the first solo Southern rap artist to ever go platinum.  The following year, the duo reunited to release In Our Lifetime Vol. 1, their final output on Suave House Records. Despite the changing landscape of hip-hop swirling around them, the group never bought into the trends or fads, instead sticking to the innovative formula they had developed nearly a decade earlier.

As their popularity spread throughout the South and beyond, so did their influence, perhaps most notably in their second home of Houston, Texas. Bun B, a member of the eminent Houston rap group UGK, said “You call me a legend, you got to call them legends. Anything I’ve done in my career, they’ve done as well. I just think they don’t get enough credit. They’re not just great rappers, they’re great writers. And they really created a strong movement in this game.” Their strong impact on the Houston scene became even more evident in the mid-2000s, when rappers like Mike Jones, Slim Thug, and Chamillionaire made their national debuts, largely emulating the sound 8Ball and MJG had established a decade earlier.

During this same period, the duo signed a deal with Sean Combs’ Bad Boy Records, becoming one of the few Southern acts signed to the legendary hip-hop label. In 2004, they released Living Legends, their first album to reach the top spot of the Hip-Hop charts and still their best-selling album to date. Living Legends spawned three hit singles “You Don’t Want Drama”, “Straight Cadillac Pimpin’” and “Forever,” introducing them to a new generation of fans. The following year, 8Ball and MJG were featured on Three 6 Mafia’s massively popular song “Stay Fly,” which is the biggest hit for both groups. As the decade rolled on, the duo continued to prove themselves as two of the most consistent and prolific artists in hip-hop, releasing several more albums as both a group and as solo artists.

In 2019, 8Ball and MJG released their first live album called Classic Pimpin’, a career-spanning retrospective. They are also currently working on a film biopic entitled Comin’ Out Hard, as well as new music. If history is any indication – and by this point, it well should be – both projects promise to be unmissable. Oh, and in case you were worried that the duo may be slowing down anytime soon, 8Ball has some words for you: “It will always be Ball and G. You can’t stop that. It’s bigger than me and him now. We’ll always be here.”